I started working on-set on the film “The Laser Effect” by Tashaun Stanfill-Perry of Sir Brael Entertainment.

Ty Laser is a high school star athlete who goes thru astronomical turmoil in order to reach his goal of becoming a professional. – From “The Laser Effect” IMDb page.

You all know I love working on set and this is yet another project I am privileged to work on. I am an associate producer on “The Laser Effect”.

Let’s Get to Work!

Today an outside scene and an inside scene was filmed.

A storyboard was used to augment understanding of the indoor scene.

The storyboard is a series of panels (similar to a comic book) where the look of a scene is illustrated (along with explanatory text). The images, taken in sequence, define the visual flow of the scene. When people read a script, they will all come away with a different interpretation. But the storyboard reflects exactly what the producer and director intend, which in turn is communicated to the rest of the cast and crew.

The look of a storyboard can range to simple sketches to full color renderings. The level of detail in a storyboard need be only as much that is necessary to convey the message. At today’s shoot, the characters in the storyboard were represented by stick figures.

The storyboard for the inside scene was drawn by Tashaun. As cast and crew were discussing the storyboard, revisions were made.

It was decided to shoot outside first, to avoid having sun too high in sky, as it is supposed to be morning preceding breakfast.

The indoor scene was set in a kitchen. The location was changed from a basement bar to the actual kitchen. Easier than making the basement bar look like a place where cooking is done.

Crew acted as stand-ins for camera placement/angle and lighting considerations.

As usual, script changes were made with consultation between cast and crew. As script supervisor I captured the modifications.

Shooting included wide shots, closeups, and over the shoulder shots.

The over the shoulder shot, which was used today, is one way of capturing a conversation between two characters. In effect the action is shot twice, from the point of view of each character. The character whose face is not showing may either mouth their words or say it out loud.

There are differences in every production in which I have worked on-set.

I have worked on productions with and without using the slate (clapperboard). Slate notation used can be different/non-standard. Today, the scene number field of the slate was filled by a verbal description.  I discussed the clapperboard in an earlier post.

I appreciated being asked my opinion of proposed script revisions, camera angles, and what’s in frame.

Behind the Scenes Photography

All photos are from the author’s collection. 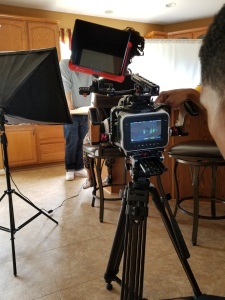 A word of wisdom from the author. Do not be afraid to ask. That is how I am getting to work on-set of more projects.

I will continue to document the “The Laser Effect” experience.

How to Shoot a Dialogue Scene | CinematicJ