If you have been following my blog, you know I am intrigued with behind-the-scenes. Over the years, I have been in the audience of TV shows, taken studio tours, and of course I now actually work behind the scenes of films and web series.

When I found out that Kimia’ Workman and Alan J. Upshur (I have worked with them on “Shock Nation”) went out to Los Angeles to appear on the game show “Let’s Make a Deal” I asked her to write about their experience for my blog. Let’s turn it over to Kimia’!

LA here I come once again! This was my 4th trip to Los Angeles, but this time for a brand new experience of attending a game show… Let’s Make A Deal with Wayne Brady. Picking out the costume was one thing because I definitely wanted to make an impression to actually get picked to participate. Well that didn’t go as planned because our costumes arrived a day after we left. So my boyfriend Alan and I had to find a costume in Hollywood and wound up being a crazy psychopath and his crazy nurse. Not what we originally wanted but it still worked out, although we didn’t get picked to play.

Arriving was so surreal. Driving up you see the big Let’s Make A Deal sign and all the tents set up. We walked up to registration with our ticket and BOOM, we were in the door just like that. I have to thank a friend of mine named DJ Boom who gave us the tickets because I never thought I would ever be on a game show. I’m glad I got to experience it because it was amazing!

So as we walked in the room there were all these people with their crazy, cooky costumes. It’s such a warm and funny environment to see everyone so happy and energetic, with nothing but positive energy in the room (but hey, wouldn’t you be if you had a chance to win some free money). After you fill out forms they gather about 15 people at a time to introduce yourself and ask questions. This is how they pre-screen who they think would be great contestants. They are looking for energy, personality, and ask about your occupation, what you like to do for fun, and your favorite part of the game show. Even the crew has tons of energy! After that, they send you into another room (the holding area) to take pictures, and we wait until everyone has been pre-screened before getting escorted to the game studio.

The waiting room… seems a bit boring when you think of a normal waiting room, but this was just not normal by any means. Just picture, a kangaroo, 3 bananas, jack in the box, and flamingos all gathered around singing at the front of the room. Got the picture in your mind? Great… because that’s just what happened! Everyone was cheerful walking around, taking pictures, gathering video, and documenting their fun time in the holding room. You better get all the recording that you want in there, because when you have to board the bus, they take all cell phones and recording devices. Oh, did I mention they are watching you the whole time, so in this case it’s ok to make a fool of yourself, but don’t go overboard. All in all, just don’t be boring.

So we drive about 10 minutes, all 150 of us, packed up in about 3 buses. As you arrive at the studio, all you’re wondering in your head is “I hope Wayne Brady likes my costume enough to pick me.” But they’ve already picked who they want by this time, even though they said it could change while on set. One of the producers mentioned an incident where a contestant went to the bathroom during the commercial break and they chose her to play, but she wasn’t back in time and they had to pick someone else. So advice… go to the bathroom before you get to the studio and hold it until the entire show is done recording.

Walking in the studio was like a kid in a candy store. It makes you think “So this is TV, this is where it all goes down.” They place you where they want you to sit. You wait, they give instructions, and out comes Wayne Brady. I loved my experience there. Even though I didn’t get picked to play, I’m so glad I had the opportunity to be there and witness how a game show operates. I tell you one thing… I’m going to put in my head now that when I go again, I will walk away with $2,000 and even though Wayne Brady will more than likely mispronounce my name, it’s not even going to bother me. So if you decide to take a trip to be on this amazing game show, enjoy the moment, have fun, meet some new friends, and hopefully you’ll get a chance to be selected and meet Wayne Brady…oh and do your best not to get a zonk! 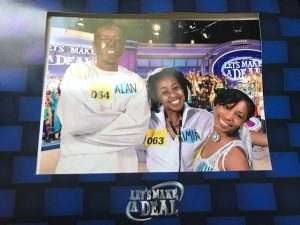 Thanks to Kimia’ for this great post. She really captured the excitement and awe of being there.

Kimia’ Workman is an actress, writer, and producer. She has appeared in live theatre, film, web series and television, such as “Shock Nation” (in which she is the creator and also stars in), “Toll Booth”, “Mad City”, and “House of Cards”. She is the founder of TruTalent Creative Works, which offers acting consultation services for beginning actors, as well as writer consultation services for writers looking to turn their works into film.

“Let’s Make a Deal” is telecast on CBS weekdays.